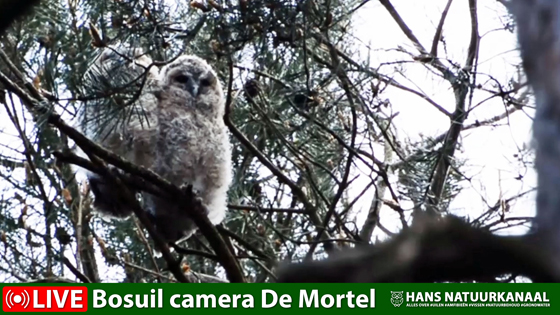 Every year a tawny owl pair chooses one of the two breeding boxes as their nest in De Mortel. During the 2021 tawny owl breeding season we started broadcasting live streams daily on January 15th, resulting in more than 25,000 views over the entire breeding period.

It was exciting to see which of the 2 nest boxes would be chosen. At the beginning of February the box visit intensity increased, the male started (Feb 18th) to supply prey and finally the tawny owl female chose on February 23th for box 2. From that time it was waiting for the first egg.

Finally February 26 the first egg. The 2nd and 3rd egg came at intervals. Finally March 5th the 4th and last egg. The male brought little prey during the breeding period, so the female regularly hunted herself. On March 28 a very curious pigeon who came to have a look in the nest box. This was attacked by the tawny owl and pulled into the box. Pigeon dead and 2 damaged eggs later appeared. Unfortunately. But on April 1st the first chick was born. A day later the second chick was born.

The supply of prey for the chicks sometimes left something to be desired. We do not know what caused it. Female had regularly left the nest to go hunting. During that period it was freezing regular and there was also a lot of snow. Maybe too cold for the mice. It was noticable that large prey such as a jackdaw, a pigeon and various other birds were regularly captured. The pigeon that was too big for the nest box hole was also very beautiful to see. Female was hanging upside down inside the nest but was not possible to get the pigeon inside. Even a frog was captured, but it was not very popular according to the chicks.

Fortunately the owls grew well. Went to do flying exercises in the closet. April 30th was the first time a chick sat in the hole in of the nest box. Soon enough they took turns sitting in the hole to look out. Sometimes they both tried at the same time. Female could not even get into the nest because there was a youngster blocking the hole. After 35 days, which is quite long for the chicks to stay in the nest, number 1 left in the morning and the other in the evening. We suddenly had branchers.

We were able to follow them outside for about a week. They were always close to each other with Male and Female close. It was also striking that Female went back to the nest every evening for a week after the owls had left. She sat down in the hole to have a look. The last time we saw the branchers was on May 13th, they were already flying well. But the parents stayed close. There is no other option because they are dependent on their parents for another month. We hope you enjoyed it as much as we did.

The Province of North Brabant is slowly turning into a desert due to the drought. Hans wants to draw attention to it with these videos.

More live streams, vlogs from Hans and everything about owls, amphibians, fish, nature conservation and groundwater can be found on our channel on YouTube.

Except where otherwise noted, content on this site is licensed under a Creative Commons Attribution-NonCommercial-NoDerivatives 4.0 International License.